He was born in Boston, Suffolk, Massachusetts on September 18, 1807 and died on September 6, 1888 in Shrewsbury, Worcester, Massachusetts; on April 12, 1831 he married Lucretia Wainwright in Medford, Massachusetts. About 1868 the architect Nathan Bradlee built a house on 11 Commonwealth Avenue in Boston for Frederick; he was a merchant and real-estate broker.

Lucretia (Bradlee) Wainwright was born in Boston, Suffolk, Massachusetts on December 16, 1810 and died in 1886 in Shrewsbury, Worcester, Massacusetts. Frederick and Lucretia Bradlee owned and lived at 13 Commonwealth Avenue in Back Bay Boston; it was built in 1907 by Thomas Parker and Thomas Rice.  There was before a house built in 1868 before which was designed by Nathaniel J. Bradlee. 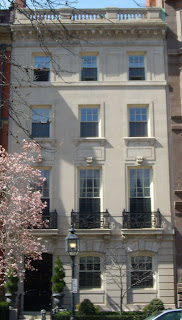