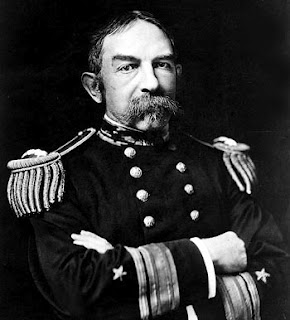 Rear Admiral Arent Schuyler Crowninshield was born in Manhattan, New York on 14 Mar 1843 and died in Philadephia, Pennsylvania on 14 May 1908). He was the grandnephew of George
Crowninshield Jr., who was the builder of Cleopatras Barge, the first ocean going yacht in America; as well as Benjamin Williams Crowninshield, 5th United States Secretary of Navy. He saw action during the  American Civil War and held high offices during the Spanish-American War.
He became lieutenant on 10 Nov 1868, commander on 25 Mar 1880 and captain on 21 Jul 1894. While he was captain he was the first to command the famouse battleship Maine and was at her commissioning in 1895. He left that command in 1897 and became the chief Bureau of Navigation with the rank of rear admiral. Crowninshield held other commands such as the commander of the training ship Portsmouth from 1878 to 1881, the school ship St. Mary's of the New York Nauticla School from 1887 to 1891, and the sloop-of-war Kearsarge from 1892 to Nov 1893.
While the 1898 Spanish-Ameircan War was going on, Crowninshield was appointed to the Naval War Board and played a larg portion in the war including the vitoriy at the Battle of Manila Bay and other battles. 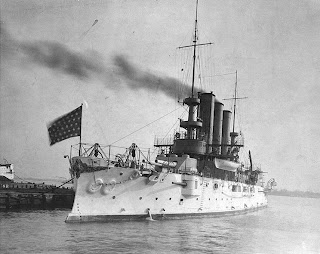